Touched by an Angel.. 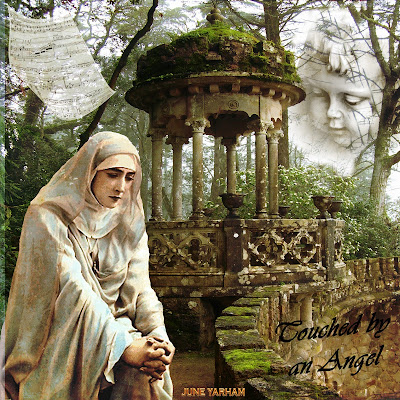 I love this vintage photo of an actress dressed as a nun. I think she's
La Rotero. The background is is a stock photo by Lugobrum on Deviant Art.
This looks such a peaceful place to me....
The historian Thomas Babington Macaulay once  remarked on a window at Lincoln Cathedral, which was considered superior to every other window in the building. It is the Rose Window in the south transept, familiarly known as the 'Bishop's Eye'.
What is especially remarkable about it is that it consists of a medley of early stained glass fragments, painstakingly fitted together over 200 years ago by an unknown apprentice, out of the pieces of glass which had been rejected by his Master!
One person's rejects may be often just what another person needs. Great things are so often made of small fragments, fitted together like a giant jigsaw.
So many beautiful creations owe their origins to several sources which merge and knit together to become a part of what the poet John Keats called 'a thing of beauty and a joy forever.'
Keep warm this weekend dear friends...
Hugs    June  xx 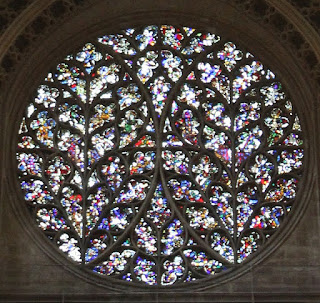 A lovely piece, and thanks for the story re Lincoln Cathedral, June.

I grabbed this picture. I can see using it in a digital collage. It is so beautiful!

Woops. Touched by an Angel is part of this post, too. I hate to keep using the same words to describe your art, but this is stunning. I love her pose and I love the arboretum. The statue looking on is perfect. Beautiful!

Your touched by an angel is so gorgeous, June. I wish some time you would tell me how you achieve such sharpness in your post pix. The rose window is beautiful.

Oh, this is positively beautiful, June!!!! And your son must have
been so thrilled with his surprise!!!
XO

Beautiful June, the cherub in the background keeping an eye on things is such a lovely touch.
luv and hugs {brenda} xoxox

Beautiful Work June, I love the cherub you added too! And the Rose Window is so Amazing! Thank you for sharing it, I had never seen a photo of it before.
xo Nancy :D