Well the day didn't progress quite as expected yesterday. Himself felt quite ill and looked dreadful so I called the doctor in. By then he was feeling a bit better but his awful waxy look worried me.
The doctor spent time with him, gave him a thorough check from top to toe, commented on the amount of bruising and thought they had sent him home too soon.
But apparently the dye they had pumped into him is nasty stuff and has almost poisoned his system and that's why he felt so ill.
He has to drink plenty to flush it out but it will take days.
I wish they would tell you things like this so at least you are prepared a little.

He is up again today but very weak. He thought he was going to be  waiting on me by now! LOL!

The people who live behind us seem to have bought a little dog. It doesn't sound a puppy yap and we can't see because of a high hedge but every time I let Corey out into the garden they both have a match to see who can bark the loudest and my little terror will not come in when called! He knows I can't chase him, little humbug!

Dearest Son sent me some pics to raise a smile this morning. I'll post this one for you. 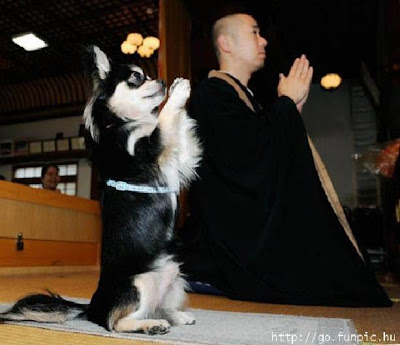 You both are in my thoughts and prayers xxxxxx

glad you know at least what was making him so sick! yeah you have to ask questions over and over!! Cute clever little fellow! they alwasy know when they can take advantage!

How cute. I am glad he is there with you even if he is still under the weather so to speak.
Hugs,
Kim

Hi June, happy to hear Freddie's operation is over but the recovery time also takes longer than they want us to believe. Tell him not to rush because he needs rest to heal. It must be hard on both of you when one is not feeling well. Keep him comfortable and do the same for yourself. PATIENCE...if I had any I'd glady share.

We have 8 of those little creatures yapping and carrying on at our house right now. It's no wonder I'm nuts!

You might need to hit Freddie over the head with an umbrella to make sure he isn't faking it. He may be enjoying all of your fussing too much, and doesn't want to have to start doing things for himself again. That's the way we men are.

Hi June, Oh i am glad Freddie is home and hopefully he will soon be feeling much better again. It must be a relief to have him home and i will keep you both in my thoughts. love your cute photo too :)
hugs June xx

Sorry you had a scare with Freddie, but glad the doc came and gave you some info on what has been happening. Take each day and hopefully it will go quickly for you both. I can't believe Ken's op was 3 weeks ago yesterday, that has flown past and he'll be able to go back to work next week.
Love the photo, brought a smile to my face.
Take care of you and himself. B xxxx

Dear June, I am still keeping you both in my prayers. Love the little Buddha doggy.