I have so much time on my hands I can spend hours browsing, looking mainly for pictures to put in my art work. Sometimes I come upon something that tickles my humour or something that arouses my curiosity so I have to have a little deeper dig to find out more. I was searching for illuminated manuscripts and found this.
You can learn something new every day.......


In Asia an animal is found which men call bonnacon. It has the head of a bull, and thereafter its whole body is of the size of a bull's with the maned neck of a horse. Its horns are convoluted, curling back on themselves in such a way that if anyone comes up against it, he is not harmed. But the protection which its forehead denies this monster is furnished by its bowels. For when it turns to flee, it discharges fumes from the excrement of its belly over a distance of three acres, the heat of which sets fire to anything it touches. In this way, it drives off its pursuers with its harmful excrement. 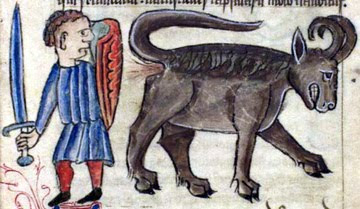 Well I always knew there were mythical beasts but this is surely something else......
Posted by Junibears at 02:14