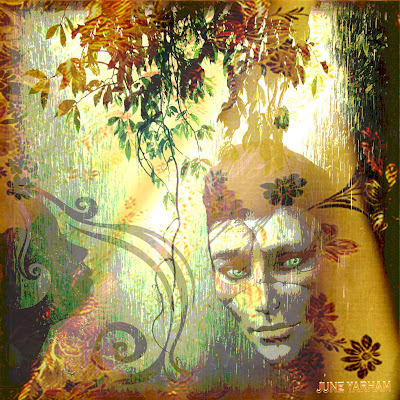 I found this face and thought it looked interesting
so just had a play with it.
Sometimes things go right and sometimes they don't.
I ordered a new scooter and a 4 wheeled pusher with a seat for Freddie. After waiting a couple of weeks the delivery arrived. The first thing he unpacked was a three wheeled pusher. 'I've already got one of those' I told him. Then it turned out he had brought the wrong scooter.
The poor chap was almost grovelling in his apologies. I laughed and said I'm not going to lead off at you. Mistakes happen and my Granddad always used to say 'Worse  things happen at sea.'
So he turned his truck around and made the 3 1/2 hour journey back home.
Hopefully we'll get the right delivery this week.
Posted by Junibears at 01:25

oh june this is really gorgeous oh just love,this you are right this really does look,so intersting,love it,hope you get your scooter delivered soon hun hugs cherylxxxxx

Wow thats so striking June I love the atmosphere and feel of this piece, very original
hugs June x

I absolutely love this! It reminds me of the movie Avatar. The colors are all different, but the spirit of the picture is the same.

Oh, I'm sorry you got the wrong order, but what a gracious attitude you had. Most people would have been yelling rudely at the deliveryman. What an example to others (myself!) to be gracious in the face of mistakes.