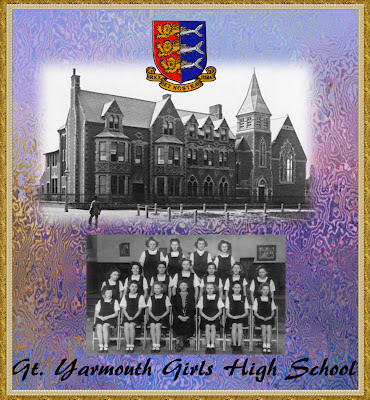 It seems hundreds of years ago I went to this school...a very big Wake Up!
The class photo was taken the  year before I started so you can imagine this is how I looked and dressed! The teacher in the centre is Miss Jackson.
The uniform even had blue gingham dresses for the Summer.
A Navy Blazer or mac and a velour hat with a brim, and as we got older this thing of great beauty had added pleats and tucks to try and give a more jaunty look!
We were forever changing shoes, outdoor shoes, house shoes for inside, plimsolls for games, etc.
Overalls for Science and another for Art.
All of the uniform they listed had to be bought from Palmer's in the Market Place, then THE most expensive store in town. This caused great hardship for my mother, struggling as a single parent after the war.
I played hockey, netball, tennis and I played for the school Rounders team, along with Anne Pashley, who later ran in the Olympics, winning a medal.
The old building was eventually pulled down about 1963 when the school moved.
Memories?  Yes.      Happy days? I'm not too sure about that......

What a wonderful story and photo. Thank you for sharing it :)

Thanks for the wonderful trip down memory lane with you. I wish they hadn't torn down that beautiful bldg.

What a memory, June, I had forgotten about the uniforms, especially the hats! lovely piece full of memories!
Have a lovely day!

Oh June!
I think we all have mixed feelings about those school days - I certainly have.
I was a boarder and missed my parents and home terribly.
It was called 'character building' but I was just unhappy!!
There were fun things too of course.

Hope you and Freddie are OK.
take care
love and hugs
Shane xox

Your piece made me remember those awful, pleated tunics and hats I had to wear. I agree about the mixed feelings.xx

Thank you for sharing your wonderful memories with us Junie. I adore personal histories I hope you have written down all about your extraordinary life for your family it would be a treasure.

i remember the shoe changing thing... i don´t think it is anywhere nowadays... yes, mixed feelings!

Thank you so much, June, for sharing your schoolday memories and the photos. It is so interesting to hear about everyone's school memories. I'm so glad you shared with us!

Oh wow, June, this is one for the family history me thinks. Fabulous memories, if not always happy ones. I love it.

Great story as always. I guess true memories are always like this - good and moments that blend and scramble in our memories. It was a beautiful building it's a shame that it was pulled down.

oh what a great story Hun,and wonderful photos,and such an amazing layout too,sweetie shame about the building though it looks amazing hugs Cherylxx

Wow, June - what a cool photo and story! I like both equally well. Sad to see these beautiful old building disappear. Thanks for sharing both with us.

Oh, I love this old photo. Thank you so much for sharing it. Your poor mother. The public school systems have always been so inconsiderate to financial matters. My own mother struggled often as well. How fascinating that you ran along with Anne Pashley. Childhood memories are so fond and yet at times, so bittersweet. ;-)

Wow- June thank you for sharing this wonderful photo and story!