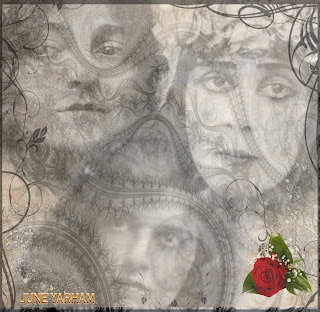 SILENT STARS
SoArtful's challenge today was inspired by the image of Gloria Swanson they gave, veiled with lace.
I have found three silent movie stars, their unsmiling faces and huge eyes draw you in.
Everything Googled, even the red rose boutonniere,
Update on Freddie...they kept him in hospital yesterday and he'll be there at least a week. He has to keep his foot raised and he's on an intravenous antibiotic drip.
They did pass the phone to him this morning so I could speak with him. He sounds cheerful, mainly I think because they are actually doing something for him.
Have a wonderful weekend,
Love and Hugs
June xxx
Posted by Junibears at 01:26

Hi June. This really is a beautiful piece. You are right those eyes just draw you right in.

Well I guess you'll get a long rest now, except for worrying, of course. At least now Freddie will be able to get better again.

Wonderful silent screen beauties! I was wondering why your picture wasn't saying anything to me at first. (bad joke)

Mesmerizing!
So much to see!

Beautiful work June I love all the layering...excellent!!!

Sorry to hear that Freddie is back in the hospital. I'll be praying for quick healing. Hope you're doing okay on your own.

A beautiful piece. Love the intensity of their gazes. I will keep Freddie and you in my prayers.
~AJ

Lovely job, June. So glad Freddie is being helped.