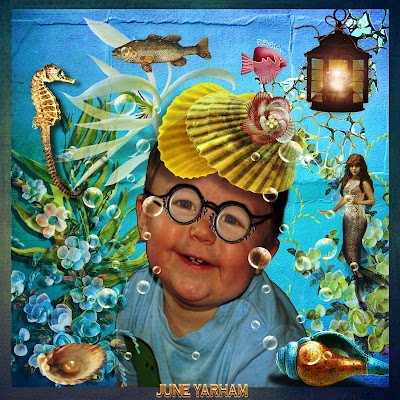 Once upon a time, there was a dear little boy called Corben.
His Mummy put him to bed that night and Corben had a Dream!
Yes, even babies have dreams!
A beautiful mermaid came to visit him, took his hand and carried him away to her magical land beneath the sea.
She gave him a small pair of goggles so the bubbles wouldn't hurt his eyes. She placed a pretty hat made of shells on his head and he looked all around. He watched the fish swimming around him, the seahorse bobbing along, the  flowers all made from shells and he laughed delightedly.
She showed him the magic pearl that lay in its shell.
After a while, it was time to go home. He took off his goggles and his shell hat and the mermaid lifted him up and in no time he was back in his little bed.
In the morning when his Mummy went to wake him, she wondered why his hair was a little damp. And she wondered even more when she saw on his pillow, just beside his head, a large pearl.........
With many thanks for the lovely picture of Corben
borrowed from his loving Granddad Bill.
Posted by Junibears at 04:02

Such a wonderful dream! I can't wait until his mother wakes up so I can show her. I always knew Corben took after me!

LOVE LOVE LOVE the dream he had June. You made me smile! And apparently Corben liked it, too!

First of all, I'm not sure if anyone else has mentioned this, but I have had a difficult time commenting on your blog. Blogs whose comment sections are set up the way yours are seem to "be on the fritz" often...at least for me.

So, if this comment goes through, I will be commenting on several posts at this time. I tried earlier on about 4 others, but they wouldn't work.

Anyhow, that is a vey sweet story about baby Corben. He's a cute little boy, and I wish him sweet dreams always.

Sending love and hugs to you.