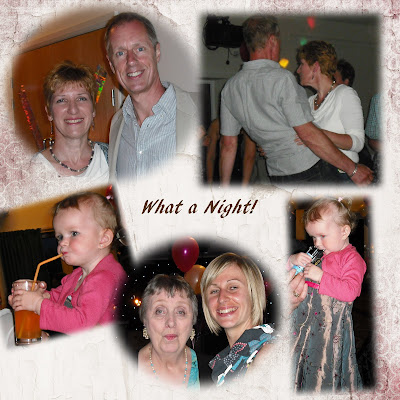 Wow! What a night. From the picture above you'd think we were half drunk.
I assure you, I'd only just arrived and wanted my pic taken with the Birthday girl
before she was whisked away.
I sat with Stanley and Jen, and there they are dancing the night away later in the evening.
Skyela looked gorgeous in her long party frock and was obviously thirsty. 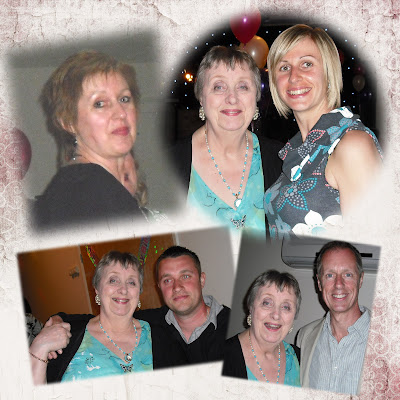 Some more family. Grandson Richard, Stanley and Sally looking rather hot!
I didn't get a chance to photograph Ashton, he was far too busy.
And of course I couldn't photograph myself having my slow dance with Richard and later Stanley,
both holding me up! My feet hurt, my back hurt, in fact I hurt all over but all forgotten
for the camera!
There were heaps of gorgeous food, followed by a great selection of cupcakes!
The disco was brilliant with all sorts of pretty coloured fairylights flickering around the room
but not really my kind of music and sooooo loud!
There were lots of children there with no tears or screams. They all seemed to like the music and rythyms and did there own thing on the dance floor. My little great niece Lauren was dancing all night!
I held out until 10.30pm. but I think it went on till midnight.
Everyone looked as though they had a great time. I've already told Freddie by phone all that happened.
So here I am this morning...still totally exhausted!
Hugs
June xxx
Posted by Junibears at 00:21

a night out is a great tonic - you look like you had a ball, June. (even though you're aching now)

Lovely family June! It looks like a spectacular event, glad you all got to share it! And happy belated birthday to the birthday girl!

Oh my goodness, June--I am SO happy that you went out and had such a good time--WOW! It looks so fun and what a beautiful family you have--and I love the pictures of you and how you put them all into a collage--And happy birthday to the precious birthday girl!!
Love,
Cindy
XO

I love a good party, and this looked (and sounded) like a GREAT one! Like you, I'm not happy with the 'unplanned' photos that always show up at events! I like to 'prepare' myself a bit! Haaaa
What a lovely family you have and how wonderful for you that the dance filled your soul. That made me smile!
Hugs my friend
Jan
xoxox

ooh june you look gorgeous!
how fun for you and your lovely family.

Ah ha! Caught in the act. I always knew you weren't a teetotaler!

Oh, but what a wonderful reason to be exhausted!!