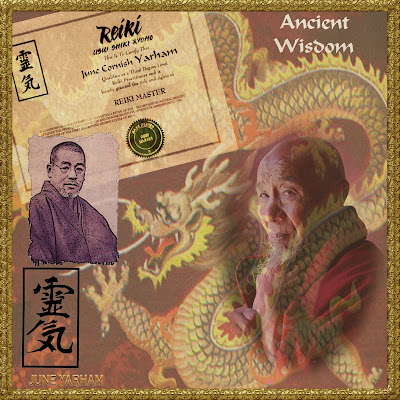 Wishing you all a happy and magical New Year's Day!
I was looking at Nigel's site the other day and he had made a lovely card for a Reiki Master friend of his. So I have taken his idea.(Thank you Nigel) and made my own collage of Ancient Wisdom.
I don't like 'blowing my own trumpet' but I became a Reiki Master in 1997 and I believe the concepts and healing from myself and others have gotten me through some tough times.
There is such a difference between Healing and Curing. Some may think they are the same but there is a world of difference.
Back in '97 I had to really hunt for a Teacher,but it has grown in the meantime so it is much easier to find a Practitioner.
Some may also think it's contradicting Christianity. I waste no time with that thought. Reiki has been here thousands of years, even before Christianity. I have also read that some believe Christ spent time in the east with monks where he learned Reiki to help him with his healing ministry. I think that's a wonderful thought.
Anyway, to me they work side by side. I couldn't send out healing thoughts if I didn't believe in both. Who can say whether or not  the great power of the Universe was created by the Great I AM?
I just accept it and rejoice.
* * * * * 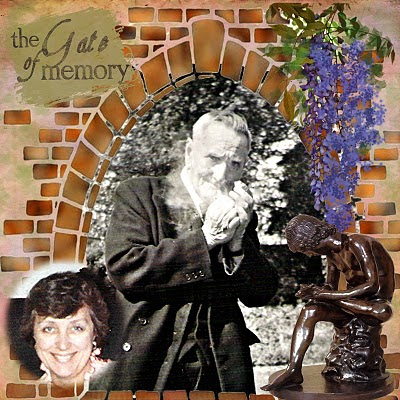 This is my favourite photo of my Granddad lighting his pipe.
I remember taking it and  this is what I looked like at the
time the pic  was taken.
The boy with the thorn in his foot is a bronze I had that he cleaned
up for me.
Never a day goes by that I don't think of him.
Posted by Junibears at 00:03

Beautiful work in both pieces, and thank you for the compliment.

I find, like you, that Reiki heals, and it's helped to make me a much calmer person. It's now almost a year and a day since I started, so in a few weeks I'll be moving on to my Reiki 2.

And Good Luck with that Nigel!
I think people have been rather wary about commenting on my Reiki piece.
Hugs xx

I love the collage of your grandfather! Such special memories for you! Lovely! Happy New Year! Best, Vicki

If you start searching for dragon bones to pound into a healing powder, that's when I'll start to worry about you!

I had a great uncle that smoked the most wonderfully scented tobacco. It was mesmerizing to see him light his pipe and then sit and listen to his tales of scuba diving in the deep seas. I could easily fall asleep to the warmth of his voice. He has been dead for many years, but I will never forget him.

What a special photo of the both of you! And the memories it instills are priceless.

My husband used to smoke a pipe and I worked in a pipe shop for a few years. I loved the smell! We have a box in the attic with the old pipes and when you open it, the scent is still present. It's not a good thing to smoke them anymore, is it? Guess they had their time and place.

I love learning about my blog friends....who knew you were a Reiki trained woman! That is so interesting! Hey, if something works, I say don't question it. Apparently the Chinese knew something!